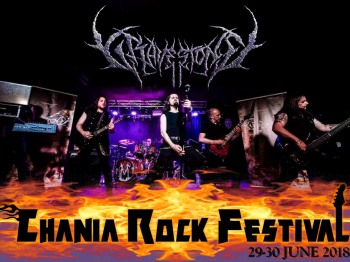 We are very glad to announce Gravestone from Rome, Italy! The band was formed in 1992, and after many club-shows signs a contract with the Audiostar Production of Salerno for a compilation to be published in audiocassette on January 1994, where the song will be included will be "Corpse Embodiment"; The band plays in various locations, including the "Circolo Degli Artisti" club in Rome. That one will be the last show before the almost 20 years split up. In 2013 there's a reunion, on the initiative of Massimiliano Buffolino and Marco Borrani and the band signs a 3years-contract with Sliptrick Records, but some problems (line up, different musical points of view) bring the band to its end (yeah, once again!). But In January 2018 Massimiliano Buffolino is again part of the band, more motivated than ever, one of the historic Gravestone, . So, FINALLY the Phoenix can be born again from its ashes,, and definitely, the show goes on Chania Rock Festival 2018!

On stage: Friday 29 of June along with SepticFlesh, Moonspell, Rock 'n' Roll Children and Perfect Mess.