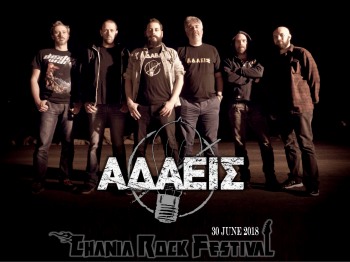 ΑΔΑΕΙΣ (ADAEIS!) is a rock band from Herclion, Crete. The band was formed in 2015 and since then they compose and perform songs from various genres of Greek rock music. In November 2016 performed live for the first time at Stoa 60 and in 2017 played live at the Matala Festival, presenting for the first time in full their musical work! They are currently working for the release of their first album. Do not miss them, ADAEIS represent a different musical note at Chania Rock Festival!

On stage: Saturday 30 June, together with DIRKSCHNEIDER,  H.E.A.T, LOOKING FOR MEDUSA and ASPHODELIA!